At the turn of the 20th century Ludvigs Neiburgs arrived in Riga, a young and strong man. He came by boat on the Daugava river, which at the time had many rapids but no hydroelectric plants.

At the turn of the 20th century Ludvigs Neiburgs arrived in Riga, a young and strong man. He came by boat on the Daugava river, which at the time had many rapids but no hydroelectric plants. The boat was used to take hay to the many horses in the city. Light cabs were used for public transportation, while heavy ones carried goods. Their horses had to be fed. As was customary at that time, people who came from the countryside stayed with their relatives, friends, or acquaintances, and slept in makeshift bedding arrangements under tables, and during the day toiled on construction sites, in one of the many factories that had sprung up in the city, and elsewhere. Ludvigs was no exception, but he longed to become a real estate developer and an owner of city buildings.

Once in the city he became a bricklayer’s apprentice. His most difficult task was to carry bricks to the upper stories of the buildings under construction. On wooden barrows, which were themselves quite heavy, climbing rickety scaffolding, the bricks had to be brought to the story that was being laid. That was the beginning of Ludvigs’s working life.

But he was strong and resourceful. Soon enough Ludvigs made a name for himself among Riga’s real estate developers and architects, beginning to erect his own buildings and collaborate with the most distinguished architects of the time.
In 1903, Neiburgs built a rental building in the then popular art nouveau style near the City Council building, in the very center of the Old Town. The building, which now houses a hotel and the Neiburgs restaurant, had large picture windows on the ground floor with a small store behind each one, selling bread, paraffin oil, vegetables, and other basic goods to the inhabitants of the fast growing city. Riga’s Old Town was yet to become a tourist destination, where sightseeing and picture worthy historical sites are interspersed with hotels, restaurants, and bars.

History, however, remembers Neiburgs not so much for his residential buildings but for three other accomplishments. One was the bridge across the Gauja River in Sigulda, which was destroyed during the Second World War but later restored in its original appearance. The second was sugar factories that were built in Jelgava and other Latvian cities. Sugar that was produced in these factories came from sugar beets grown on local farms, so there was a particular widespread fondness for the factories, explained in part also by the fact that they had no direct relation to the Soviet military industrial complex that dominated the Latvian economy during the Soviet years. In those years, the sugar factories were mentioned with nostalgia, along with the fact that during the interwar years one could afford to put three spoonfuls of sugar in one’s teacup. The liquidation of the sugar factories after the restoration of independence is still widely considered to be a tragedy for the national economy.

Yet the most ambitious, interesting and imaginative of Ludvigs Neiburgs’s projects were several constructions that have not been preserved. The All-Latvian Song Festival was launched in 1873, adopting the German choir singing tradition. One of the basic elements of the Festival is the amateur choirs arriving from all parts of Latvia, joining their voices in one huge choir. The number of singers is very large and even larger is the number of listeners.

There was no venue that could accommodate everyone in Riga, so come Song Festival, Neiburgs built temporary stages for the singers and temporary seating for the audience. Commercial stalls and eateries were also not forgotten. Only after the war did the Song Festival acquire a permanent venue at the open-air amphitheater in Mežaparks, built in 1955. Before then, the festival took place in different parts of Riga, and each time the necessary constructions were erected and then taken down. As a rule, these were easy to assemble wooden constructions, which still required the input from renowned Latvian architects, since the Song Festival had fast become an essential element of national pride, Latvian identity and the desire for sovereignty and statehood. While the temporary stages have long since been disassembled and the sugar factories closed, the Neiburgs legacy lives on in the Old Town building with the hotel and restaurant that bear his name. 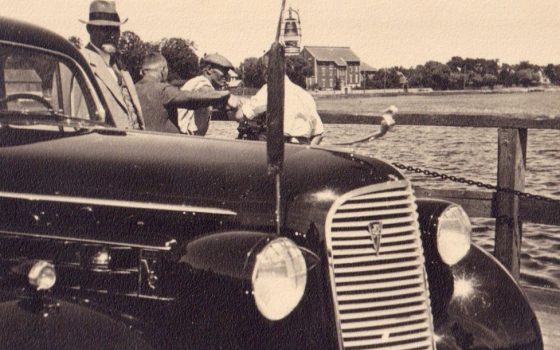